Descendants of William and Ann Ince 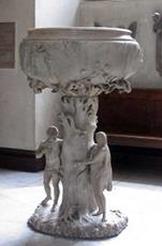 William Ince (1765-1808) – the oldest surviving son was a Captain in the Bombay Artillery for the East India Company.   He died in Surat on 28th September 1808 aged 44.   The causes are unknown, but it was not in battle.   In his will he left everything to my girl Fatimah and Fatima Bibu of Bombay was legally sworn in as his sole legatee and executor.

Charles (b 1768) – In 1794 the name Mayhew, Ince & Sons occasionally appeared on their bills, and Charles was listed in Thomas Sheraton’s Cabinet Dictionary at 23 Holles Street, Cavendish Square in 1803.  He married Anna Maria Jones in 1797 and they had three children.   Sadly two of them died in 1803 and were buried at Whitefield Memorial Church.   The oldest, Charles Nigel Ince, married his cousin Isabella Cowell in 1828.  Charles and Anna Maria moved to south Wales where she ran a school.   She died in 1822 and according to the Land Registry document of 1825, Charles was late of Lawnsea (Swansea) now of the City of Worcester. 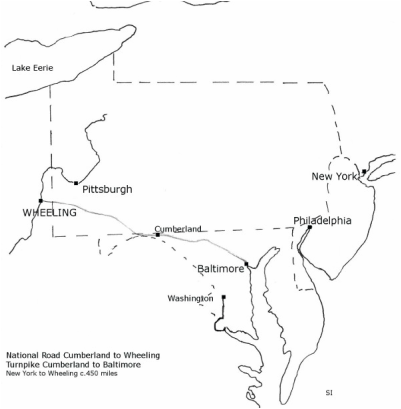 ﻿Frederick Ince (1769-1836) - on 2nd August 1786 Frederick was apprenticed to George Wellings of London in the trade ‘Citizen Coach & Harness.’  The seven-year term ended in 1793 and he married Martha de Bar on 31st August in St Botolph without Bishopsgate.   They had nine children, of whom six survived, some baptised in Surrey where Frederick was recorded as a Master coach-maker.

In 1819 Frederick wrote a letter to the War and Colonial Department and Colonial Office: Cape of Good Hope Colony, asking to become a settler there.  He gave his address as 28 Milk Street, Bristol.

According to the notes written by Charles Frederick Ince in 1925, as entered in the Bible..(Frederick) set sail from Newport for New York on 18th September 1826 on board the Marothon,… settled I was told Wieling, America, and took up sheep farming.    Wheeling (Wieling) in Virginia had become an important commercial centre by the beginning of the nineteenth century.

From evidence provided by letters and documents held by one of Frederick's descendants, he actually sailed out in 1824, using the alias John Smith.

C F Ince’s notes continue that Frederick had overdone his ambition in sheep farming and land buying in Wieling and ended his life by shooting himself.   According to his letters, the story was a little different and his last letter was written in a steady hand in September 1836 from Fork Ridge, near Martin's Mill, Grave Creek.  See William Ince Cabinet Maker for full details. 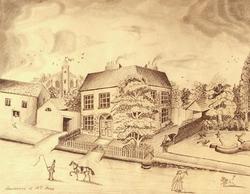 Residence of Mrs Ince in Earl's Colne
Martha de Bar (1774-1850) - Martha’s father was Benedict de Bar and though the family may have had French origins it is possible they came to England via Ireland.
Martha was born in Bristol and was baptised at St Augustine the Less on 15th May 1774.  By 1783 the family had moved to Lambeth, Surrey and by 1789 they were living in Bishopsgate.
In 1826 when Frederick set sail for his new life in America, Martha refused to go.   According to C F Ince’s notes, she lived in Circencester then went to Earls Colne in Essex where their daughter Isabella married George Morse in 1833.   By  1841  Martha had moved to live with Isabella, George and their two daughters in Gloucester where she died in 1850 and was buried at the church of St Michael in the City.    She was described on the death certificate as the widow of Frederick Ince, coach builder. 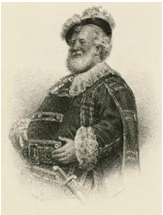 Ben de Bar as Falstaff F Welcker 1818 Cornell University Library
Martha had a brother, Ben, who also lived in London and was an accountant.   Two of his children took to the stage and ended up in America.   Ben de Bar (1813-1877) was immensely successful.   He was an actor,  manager, and theatre owner who did much to help establish New Orleans and St Louis as leading theatre cities in America.   His death in 1877 was mourned throughout St Louis.   Many of the shops had a picture of Falstaff with crepe border in their show windows and some thirty-five thousand people went to view his body in the Masonic Building.

His sister, Clementina de Bar, was a dancer and appeared on the New York stage.   She married Junius Brutus Booth Jr.  and the de Bar house in St Louis was thoroughly searched after the assassination of Abraham Lincoln by Junius’ brother John Wilkes Booth.

Isabella (1773-1852) – She married George Cowell at Hornsey Parish Church in December 1795.   William bought them a house in America Square.   In 1825 they lived in Fitzroy Square.   From his will, it appears that George Cowell was a merchant, with an interest in Jamaica.   George helped with the Ince v Mayhew court case.

Mary Ann (1782-1862) – She married Thomas Willson an architect in August 1808, at St Botolph’s, Aldgate.  In 1820 he led one of the parties promoted by the Government to settle in the Cape of Good Hope.   He and his party of settlers, including Mary Ann and their children, aged 9, 6 and 4, departed on 12th February 1820.   Thomas had tried to set up a scheme whereby he was treated as Lord of the Manor but the other settlers refused to comply and Thomas had to return to Cape Town and in December 1820 the family embarked at Port Elizabeth and came home.

In 1828 Thomas exhibited his designs for a Pyramid Cemetery for London, to be called the Metropolitan Sepulchre.   He envisioned a honeycomb of catacombs, with room for a total of five million bodies.   The whole structure would have occupied eighteen acres at its base which he proposed should be on Primrose Hill.   At a height of 1500 feet, it would have been nearly four times the height of St Paul’s Cathedral.   Unsurprisingly it was never built 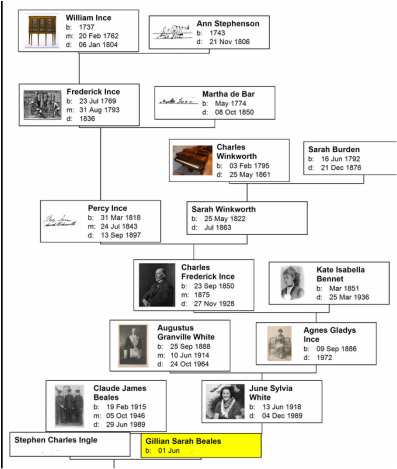 From Ince to Ingle
Here is a tree to show how I am connected to William Ince.

Charles Winkworth, whose daughter, Sarah, married Percy Ince, was a manager for the piano-manufacturer Collard & Collard.

Charles Frederick Ince was a  law stationer, who left the family  detailed notes of his life written in 1925.  They were copied by his son Charles Percy in 1942, and sent to me by my cousin in Scotland, who I met through  ancestry, whose mother had a copy - such serendipity.

Gus Granville White, my grandfather, was descended from the musician Louis Mercy, who played recorder in Handel's band at Cannons in 1718, and composed flute and bassoon concertos.
Proudly powered by Weebly